This year the Peace Corps celebrates its 50th birthday.  The federally-funded program has sent nearly a quarter million Americans around the world, since it was signed and enacted into law by President John F. Kennedy.  While many friends of mine are current or past Peace Corps volunteers, I got into a heated debate with a friend about it just before she left for Panama.  The argument went something like this:  “You should really do it, Noelle.  If you don’t travel to other countries, you’ll never get out of that DC mindset, you’ll never be cultured.”  “But why do I need to travel to ‘be cultured?’  Do I not ‘have’ culture just as I am?  What do you mean by culture anyway?”

Though we never resolved the debate, I found myself wondering recently if and how my friend’s understanding of the elusive term “culture” might change through his Peace Corps service.  What is it that she will have gained from her time in Colombia – is it really “culture?”  Our debate is symptomatic of a larger issue and so the question we might ask here is: How does the Peace Corps define “culture” and when is it invoked?  How does Peace Corps use the term to prepare their volunteers to live abroad? In what follows,  I take a critical look at “culture” as it is used and appropriated by Peace Corps in their “Culture Matters: Cross Cultural Workbook[1].”  I will make use of key readings in the field of  intercultural communication by Scollon and Scollon (1997, 2012) and Piller (2007).

As part of their pre-departure training, volunteers are given a “Cross Cultural Workbook” – a 266-page crash course in “what to expect when you’re crossing cultures” to help prepare volunteers for the “toughest job you’ll ever love” (1).  A caveat in the introduction claims that “while it impossible to talk about culture without generalizing” (2) it warns readers from making a priori assumptions and generalizations about cultures.  Nevertheless, the document proceeds to do exactly that.  From my reading of the document I find many of the prevailing views of “cross cultural communication[2],” which have been addressed and problematized in the study of intercultural/interdiscourse communication pioneered by Scollon (1997, 2003, 2012) and others, including:

3) emphasis on miscommunication, and that being rooted in “cultural difference” (ibid.)

5) non-empirical; use of constructed examples abstracted from social interaction (ibid.) 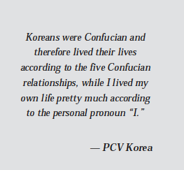 Throughout the manual, quotes from Peace Corps members, staff, and others are inserted in the sidebar that illustrate the points above.  In this quote by a PCV (Peace Corp Volunteer) stationed in Korea, culture is synonymous with nationality (“Koreans are…”), rather than the prevailing social scientific understanding of identity, on the basis of any social category (race, gender, nationality) as an abstraction or social construction.  In addition to falling prey to Scollon’s “stereotyping interculturalism,” the text also treats culture as “predictive.” Thus, we can understand how Koreans “live their lives” because they are Confucian and all people who believe in Confucian principles act in X way.  This idea is similar to what Scollon and Scollon (2012) refer to as “lumping” and “binarism.”  By saying that “Koreans are…” the author(s) essentialize(s) and reifies/y the social category of “Korean,” implying that all Koreans are alike (i.e. “lumping”).  Lastly, by juxtaposing the lifestyle of “Koreans” with her/his own, the author(s) discursively draw(s) the boundary between Koreans and Americans (i.e. “binarism”).

In this second example, we see another common pitfall of the cross cultural communication approach:  The use of constructed examples rather than empirically-driven ones.  Despite being a thought-provoking scenario, it is problematic for many reasons – namely, in which country is “prejudice against Black people traditional?”  Racism and discrimination is hardly a “tradition,” it is a behavior; an action that cannot be essentialized as a lifestyle or characteristic of a macro social category.

In conclusion, I would like to return to the idea that “it is impossible to talk about culture without generalizing.”  Scollon and others, through mediated discourse analysis and its methodological arm of nexus analysis have demonstrated that this simply is not the case.   Furthermore, if the Peace Corps took a mediated discourse analytic approach, perhaps they would come to the conclusion that what is often written off as “cultural” misunderstanding is actually linguistically based.